A word about the Measles…

There is a lot of misunderstanding and hysteria in our society over the Coronavirus.  As such I have taken a deeper look to attempt to remove the hype and report just the facts to you.

There is a lot of misunderstanding and hysteria in our society over the Coronavirus.  As such I have taken a deeper look to attempt to remove the hype and report just the facts to you.

I will not give an accounting of how we reached this point.  I am looking to give you good advice on what it is, how it is transmitted, the risks surrounding it, and action steps you can and should take.

WHO IS THE MOST VULNERABLE TO CORONAVIRUS?
Just like flu, older individuals, especially those with “comorbid conditions” are at the greatest risk (comorbid: chronic or long-term conditions that stress the body’s immune system).  People who are immune suppressed are also at high risk.  Conditions considered high risk include diabetes, cancer/previous cancer, heart disease, chronic lung disease, chronic kidney disease, taking immunosuppressing medications).

HOW IS THE CORONAVIRUS PASSED FROM PERSON TO PERSON?
The virus appears to be passed person-to-person the same way as the flu – through small droplets produced when a person coughs or sneezes.  The virus can enter the body through the mouth, nose or eyes.  Therefore, close proximity (within 6 feet) AND prolonged exposure increases likely transmission.  Airborne transmission of the virus over long distances is unlikely.

WHAT ARE THE EARLY SYMPTOMS OF CORONAVIRUS?
The virus can take from 2-14 days to exhibit symptoms, and this wide symptom window may be why it has been so tricky to prevent its spread.  The early symptoms are similar to flu, which is why it may be occasionally confused with flu.  Symptoms of a respiratory infection such as cough, sore throat, and fever are early symptoms.  CDC advises mildly ill patients to stay home and contact their doctor by phone for guidance on management of the symptoms.

Emergency warning signs are: difficulty breathing or shortness of breath; persistent pain or pressure in the chest; new confusion or inability to maintain awareness; bluish lips or face.  If you or someone near you has these symptoms, seek IMMEDIATE medical attention!

WHAT ACTIONS CAN I PERSONALLY TAKE TO LIMIT MY RISK?
If you are not in a high-risk group, wash hands with soap frequently or use alcohol-based hand rubs (hand sanitizer). Out of respect for those at high risk, consider limiting your face-to-face visits with them.

If you are in a high-risk group, stay in place!  Limit your exposure by limiting your public presence.  Only venture out to take care of absolute necessities (i.e. doctor’s appointments) and strongly consider asking others to shop for you or use an online delivery service.

All should boost their immune systems as much as possible during this time as well.  My own personal belief based on the early prevalence in Washington state is that vitamin D levels may determine the body’s resistance and resilience.  Proper probiotics also have been shown to increase the body’s resistance to upper respiratory infections.

We have a limited stock of Vitamin D and do not stock probiotics.  However, we do utilize an online store and if we are out of stock, please ask us for a referral to a website where both can be ordered and delivered to your door. (online: Recommendations are Vitamin D and Probiotics, & the link is: https://wellevate.me/presten-witherspoon )

WHO IS TESTING FOR CORONAVIRUS?
Contrary to common belief, the federal government is backing off as the primary testers for the virus; as the illness grows, such a system would require sending thousands of tests to the CDC in Atlanta and would be slow, ineffective and overwhelming to the CDC testing capacity.  State and local health departments are beginning to offer the test, allowing easier and quicker access to both tests and results.

The best test case in this scenario was the Diamond Princess cruise ship.  It was a contained situation where treatment was not given quickly and those who should have been protected were not.  In all, 705 people were infected, and 6 died, representing a death rate of less than 1%.  All who died were older than 70.

Infectious disease doctors also say the death rate is likely lower than is being reported in the hysteria; only severe cases tend to show up at hospitals and doctor’s offices to be counted, and as understanding and testing of the disease increases and milder cases are found, the mortality rate is expected to fall precipitously.  It is also possible for some people to be exposed to the virus and exhibit no or few symptoms before recovery, and these are not counted.

Death rates are varying by country.  In South Korea, the death rate is 0.6%; in China (outside of Wuhan), the reported death rate is 0.7%.  Quoting an article from ABC News, “…the best experts can say is that COVID-19 is probably more deadly that the seasonal flu, but much less deadly than other high profile outbreaks like Ebola, SARS, and MERS, with death rates of 50%, 10%, and 35%, respectively.” 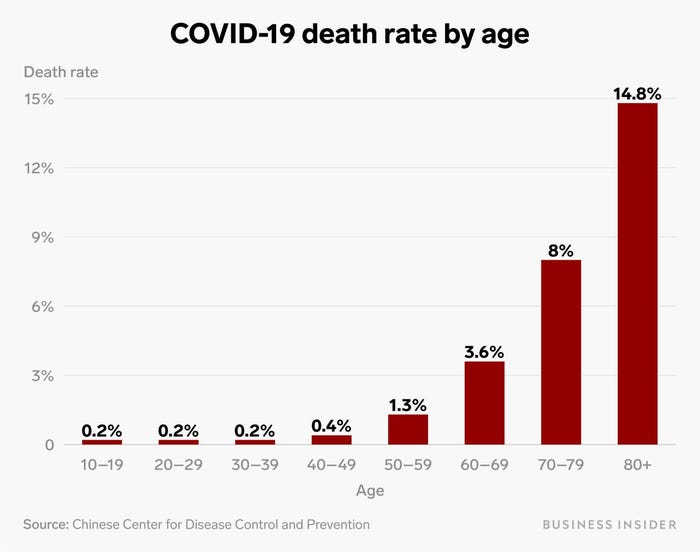 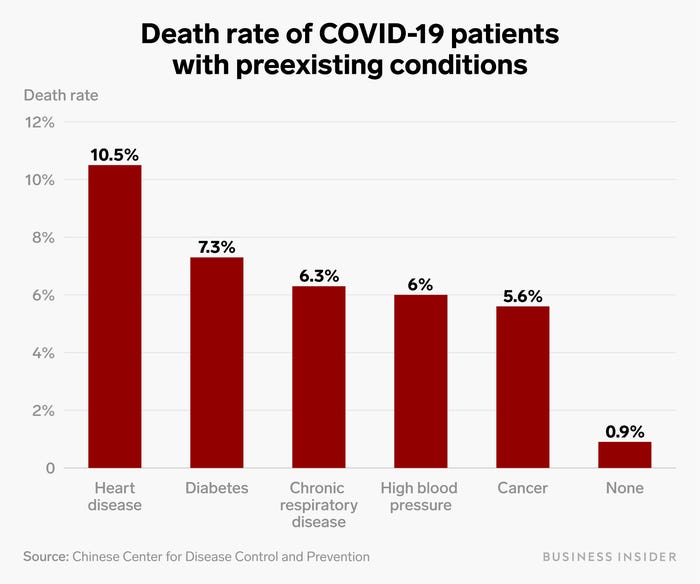 WHY IS EUROPE HAVING SUCH A HIGH DEATH RATE COMPARED TO U.S.A.?
According to national statistics, several nations in the EU have some of the oldest populations in the world.  The EU was slower than the U.S. to shut down travel from China after the initial outbreak, and as Coronavirus disproportionately is dangerous to the elderly, it means there is a much greater level of infection among the elderly in Europe than in the U.S.  Based on the charts above, you can see why that could dramatically increase the death rate in countries with a large elderly population.

WHAT IS THE TYPICAL PATTERN OF VIRAL INFECTIONS IN PUBLIC?
Typical epidemics of flu in France were tracked by researchers over 30 years, and the typical pattern seems to be slow growth in the beginning, a peak of new cases around three weeks, and a drop in cases around six weeks (source: Scientific Reports volume 8, Article number: 12786 [2018]).  In a short reporting cycle (such as the one we are in) that features hourly updates on the number of people with cases and the number of deaths (“conveniently” leaving out the age and prior infirmity of the victims), it may seem that a growth cycle is both exponential and chronic; however, with more testing, plus the increased exposure of the populace, there will be a point where the new cases max out and begin decreasing.  It is impossible to say when this will occur, as the virus is similar, yet more virulent than typical flu.

MY OPINION and CONCLUSIONS:
Conclusion: Due to the presence of mild untested cases among those under age 60, the mortality rate is likely much lower than it seems.

Conclusion: Despite a lower death rate than the hysteria is hyping, this is still more dangerous than the typical flu – 6 to 7 times more deadly.  Just like with the flu, that more dangerous nature will be most pronounced among the elderly and those with preexisting conditions.  While this disease is not nearly as deadly as other diseases we have encountered in the last 20 years, callous disregard of the most vulnerable demographics will lead to unneeded deaths.

Conclusion: Everyone should take precautions to avoid exposing family and friends over the age of 60, those who have preexisting conditions or are immunocompromised.

OPINION: Most of the reactions to this illness in the US has been hysteria and hype, NOT based upon firm science and fact.  As discussed in detail above, there are definite areas of concern that can and should be addressed, but the massive hysteria has led to a large scale “cancellation of life” in much of the country.

OPINION: My belief is that several things have generally spooked the public: 1) seeing videos from Wuhan, China of health officials welding people into their residences or pulling people out of their vehicles to place them in quarantine; 2) seeing large numbers of ill and dying in places like Wuhan, Iran and Italy; 3) non-stop, “breaking news” media coverage of each new case and death that pops up; 4) media focus on the bad news in Italy and Iran while also ignoring good news such as the low death rate in South Korea.  The reactions to the hysteria have been extreme by practically every major sport in the US, and now almost every university and school district.  These extreme reactions are not helping quell the panic people are feeling; hence my urgency to research and share what I have found.  The weekend of March 14-15, 2020 was my first chance to sit down and research.

OPINION: The damage done to our economy may be the biggest long-term effect of the Coronavirus.  Practically every industry is being affected in some way.  Despite this, I believe in 2-3 months, when the panic is passed and the infection is on its downward swing, we will see a massive boom in the economy, with a major positive.  People are seeing the danger of having many of our medications and medical supplies produced in other countries, and we may end up with large investments in pharmaceutical and medical manufacturing returning to the U.S.